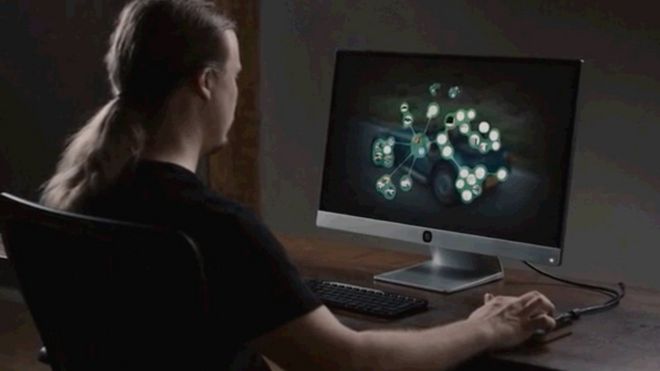 So you know how you’ve been using your computer all these years? With files, folders, a mouse and all that?

It’s wrong. All of it. And well overdue a rethink.

That’s the view of Finnish techie Kristoffer Lawson and his team.

“Solu” (that’s Finnish for “organic cell”) is a new type of computer that has just been announced.

It’s a little device with a stylish wooden finish that looks a bit like an expensive coaster.

It can be used independently a standalone touchscreen device, a bit like a smartphone – although it doesn’t have cellular capability yet.

It can be hooked up to a bigger display at which point the handheld device is used as a controller. Various gestures – swiping, tapping, pinching – are used to control what happens on the bigger screen.

It’s a neat interaction, let down by the fact the device doesn’t connect to the screen wirelessly – it instead requires an HDMI cable and a power source if you want it to last longer than six hours or so.

Solu’s main selling point is its software. It looks nothing like any computer you’ve ever used before.

Running on a heavily-modified version of Google’s Android operating system, the Solu software does away with many of the conventions we’re used to in home computing. 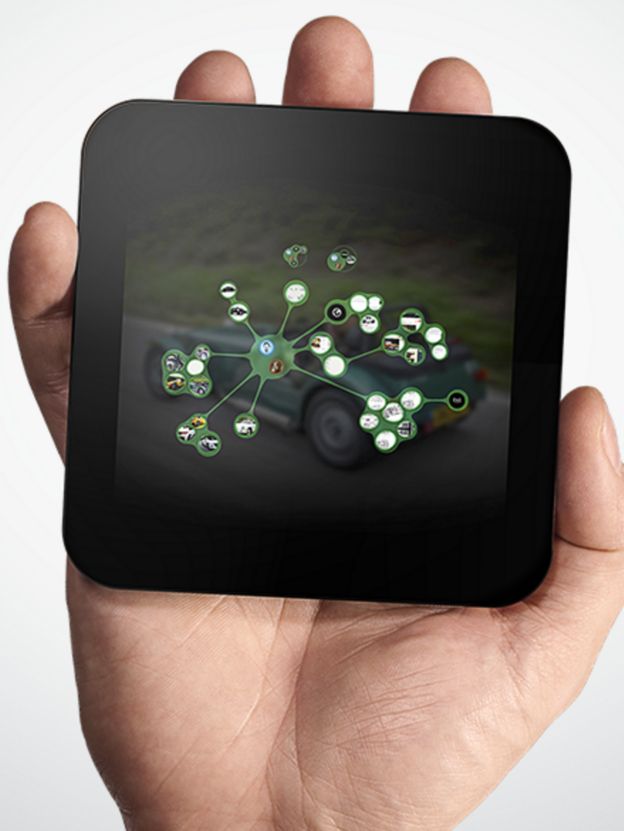 The most noticeable is file management. No folders to be seen here – instead an interface that looks like a mind map, with projects and ideas grouped in little orbs and clusters. It provokes better focus, the team says.

And when it comes to collaborating, there’s no emailing documents back and forth. Instead, Solu uses cloud computing to help people work together on documents at the same time, in a way that’s far more aesthetically pleasing than what’s out there right now.

You can see what colleagues are up to on shared files, and when something is being edited by a co-worker, it lights up on your screen too. It’s smart, it’s pretty intuitive, but you can’t imagine any serious business using it at scale.

But here’s a nice idea: you don’t buy any software.

Instead, you pay a monthly subscription fee (the amount hasn’t been decided yet, but they’re hoping for around $20 a month) and you can use whichever programs you like. Developers will get a slice of that fee if you use their program. Think Spotify, but for software.

But nice ideas don’t guarantee success. And while making technology predictions can leave people with egg on their faces, I think it’s pretty safe to say Solu is unlikely to get off the ground.

Let’s start here: Solu is being launched as a crowdfunded Kickstarter campaign. If you “buy” one today – through Kickstarter – you won’t get it until May 2016.

That’s pretty typical for crowdfunded technology, but alarm bells begin to ring when such lofty promises are being made.

For starters, despite it now being “on sale”, the product is nowhere near ready.

As well as minor tech fails during the launch presentation – which can be attributed to dodgy wifi at the venue – one of the apps, a kind of stripped-down accounting program, appeared so desperately unintuitive that the company’s chief operating officer, on stage to demonstrate how simple it was, ended up asking Lawson how to use it.

The device itself looks neat but falls short of the promise of an edge-to-edge touch surface. The only devices made so far are prototypes that are way off feeling like a product just a few months away from hitting the market.

To give you an idea: after one crashed, one of the team’s developers admitted that right now the only way to restart it was by connecting it to his normal laptop.

The future version will solve that problem, I was assured. It will also have a better touchscreen. And might have cellular capability.

Its cost is competitive – 349 euros (£257) or 299 euros if you buy it early. It’s low because, like a subsidised mobile phone, Solu’s profitability will come from the monthly subscriptions rather than the hardware sale.

You get three months of subscription included when you buy the device. Great! How much will it be after that? They couldn’t tell me. It hadn’t been worked out yet.

How long is the battery life? Not sure.

If it sounds like I’m being too hard on an ambitious team that is at the early stage of an innovation – let’s look at it a different way.

Most Kickstarter launches consist of a good pitch and slick video explaining an idea. This was something on another level of reality. In a huge hall in San Francisco, with free drinks, food and a fella playing an organ, the Solu team boldly declared the end of computing as we know it. Apple and Microsoft, they said, should watch out.

The confidence is both admirable and alarming.

Because for Solu to succeed, Lawson and his team need to convince people to ditch an operating system they’re used to, on hardware they trust, and instead go for a mobile device that does less than the mobile you currently have in your pocket. The software subscription service is nice, but there’s no word on whether major developers actually want to do business on Solu’s terms.

Not only that, but for the collaboration features to be effective the team needs entire businesses to buy in to the Solu vision.

Lawson is right in that we do need to take a hard look at some of the computing conventions that are inefficient and frustrating. But unfortunately for him and his team, Solu isn’t going to be the solution to that problem.

Oscar Pistorius to be freed from prison NEXT WEEK