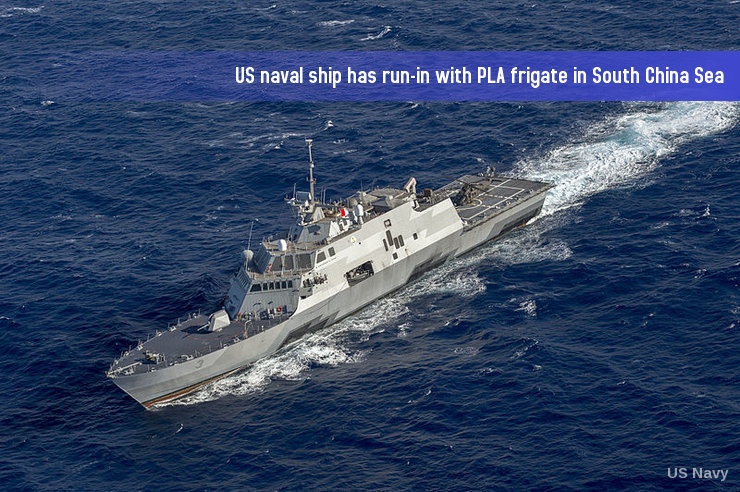 By Paul McLeary with Adam Rawnsley

The stories we tell ourselves. It appeared to be a simple enough story, but over the last week, Pentagon and Obama administration officials have struggled to explain exactly what the USS Lassen did when it sailed near Subi Reef in the South China Sea. FP’s Dan De Luce and Keith Johnson have been following the ship’s wake, and have found conflicting accounts of what the ship was up to. When questioned by FP, “officials offered conflicting accounts as to whether the ship took steps to directly challenge China’s maritime claims in the strategic waterway — or whether it pulled its punches, tacitly conceding Beijing’s position,” they write.

Good idea, bad P.R. You’ll have to read the story to get a full sense of the linguistic knots the Pentagon is tying itself in, but the crux of the issue is that officials originally insisted the Lassen carried out a “freedom of navigation” operation, which could mean the vessel operated sonar, had its helicopters take off from the deck, or lingered in the area. But some officials weren’t ready to go that far, suggesting the ship might have just sailed through quietly without doing any of those things, making the trip an “innocent passage,” which carries with it the recognition of China’s territorial rights over the area. But doing so would undermine the whole point of the mission in the first place. Read the story.

Fair winds. While debate swirls around what to call the Lassen’s trip, the commanding officer of the ship has been telling reporters that the Chinese warships that shadowed his vessel for 10 days were full of nice, talkative people. Speaking aboard the the aircraft carrier USS Theodore Roosevelt during Defense Secretary Ash Carter’s visit this week, Cmdr. Robert Francis said the Chinese “were very cordial the entire time … even before and after the Spratly islands transit.” Finally, “when they left us they said, ‘Hey, we’re not going to be with you anymore. Wish you a pleasant voyage. Hope to see you again’.”

All apologies. A new report by Médecins Sans Frontières (MSF) shows that the night an American AC-130 gunship made repeated strikes on its hospital in the city of Kunduz, Afghanistan, on Oct. 3, few on either side of the attack had much idea what was happening. Text messages sent to MSF personnel from NATO staffers in Kabul expressed confusion over who was doing what,  FP’s Paul McLeary reports, with one NATO official writing to his MSF contact, “I’ll do my best, praying for you all.” The scene at the compound during the attack, according to the report, was horrific: “patients burned in their beds, medical staff were decapitated and lost limbs, and others were shot by the circling AC-130 gunship while fleeing the burning building.” The group said at least 30 of its staffers and patients were killed.

Not a hipster beard. Canada’s new defense minister isn’t someone to trifle with. Newly elected Prime Minister Justin Trudeau named Harjit Sajjan, a veteran of two tours in Afghanistan and a former Vancouver cop who served on the city’s gang unit to his cabinet this week, prompting the Canadian media to fawn over his “badass” image. But there’s more. FP’s Siobhan O’Grady writes that Sajjan, who was born in India but moved to Canada at age 5, had to design his own gas mask when he joined the military — which he later patented — to take into account his Sikh beard. Sajjan is coming into the job not only as a decorated combat vet, but also as someone who has worked closely with the U.S. military, since he served as an advisor to U.S. Lt. Gen. James Terry in Afghanistan in 2011, as well.

Good morning, all, and thanks again for clicking on through at the end of this long week. We hope you find this little thing we have going on here useful. As always, if you have any thoughts, announcements, tips, or national security-related events to share, please pass them along! Best way is to send them to paul.mcleary@foreignpolicy.com or on Twitter: @paulmcleary or @arawnsley.

With the upcoming Burmese elections on Sunday, don’t miss this new Backstory episode, where FP’s Christian Caryl reports from Rangoon, Burma. He talks about how much Burma, whose official name is Myanmar, has changed in the past four years, what Burmese voters in urban and rural areas actually care about most, and the one crucial thing that Westerners always forget about Aung San Suu Kyi. Listen and subscribe here: http://atfp.co/1K7nhrI

What’s the price of failure? About $2 million a trainee, according to USA Today. That’s the estimate the paper arrived at after crunching the numbers for the Pentagon’s cancelled program to train and equip Syrian rebels to take on the Islamic State. The Defense Department spent $384 million of the $500 million budgeted for the program and trained roughly 180 Syrians, well short of the 5,000 the program’s architects had hoped for. Only about 95 of the original 180 recruits trained by the Pentagon still remain in Syria.

The Tehran government is recruiting Afghan refugees to fight in Syria, and at least 200 Afghans — one as young as 16 — have died fighting for the regime of Bashar al-Assad, The Guardian reports. The Fatemioun Division was set up in Iran several years ago, and while it is not clear how many soldiers serve in it, an Iranian division typically has somewhere between 10,000 to 12,000 soldiers. “Iranian agencies reported that its commander, Reza Khavari, was killed in Syria last month and it is not clear who has replaced him since,” the Guardian says.

The Financial Times reports that NATO is working on a “southern strategy” to project power in the eastern Mediterranean, where Russia has recently amped up its naval activity. The strategy would include increases in surveillance in the region, provided in part by the deployment of new Global Hawk drones to Italy, and extend the alliance’s footprint in the region through greater engagement with Middle Eastern and North African militaries as well as more deployments and exercises.

A little further north, Lithuania wants to buy 84 American-made Stryker Infantry Carrier Vehicles for about $599 million. The U.S. State Department has already signed off on the deal to the NATO ally, which now awaits congressional approval. The Lithuanians don’t just want an infantry carrier, however. The request specifically asks for a 30mm gun system to come along with the vehicle, which would really give the vehicle some pop. The announcement from the Pentagon’s Defense Security Cooperation Agency on Thursday said that Lithuania’s acquisition of the Stryker “would represent a major advancement in capability for the Lithuanian Land Forces, filling a vital capability gap that is not currently addressed.” Lithuania sits hard up against the Russian enclave of Kaliningrad on the Baltic Sea, which already bristles with Russian firepower.

Afghanistan’s TOLOnews reports that Afghan security forces have managed to retake territory from the Taliban in southern Helmand province. The Afghan troops have reclaimed a military base in Nad-e-Ali captured by Taliban militants and are currently fanning out through the town of Marjah, which U.S. Marines fought so hard to take and hold in 2010, but which has since been mostly lost to the Taliban.

The Defense Department says it will make condolence payments to the families of the 30 people it killed and others it injured during an attack on the MSF hospital in Kunduz on Oct. 3. The Washington Post notes that the admitted presence of wounded Taliban fighters receiving treatment in the hospital at the time of the attack could thus result in the Pentagon possibly compensating Taliban fighters or their families, though spokespeople for the U.S. military are being vague about the possibility.

It looks like it could be the beginning of the end for the little multi-billion dollar balloon that stole our hearts with a rampage across the northeast last month. The L.A. Times reports that the Pentagon has suspended the $2.8 billion JLENS program after one of the aerostats slipped loose from its bindings in late October and drifted from Baltimore to Pennsylvania. The JLENS program had difficulty fulfilling its basic responsibilities in spotting incoming threats to the capital region even before its multi-state escape attempt, according to a previous Times report, but House Armed Services Chairman Rep. Mac Thornberry (R-Tx.) says he and House Republicans nonetheless still support funding the program.

Chinese President Xi Jinping is in Vietnam for a state visit and an attempt to repair some of the damage in the two countries’ relationship before Vietnam moves even closer to the United States’ orbit, according to U.S. News & World Report. Vietnam’s foreign policy has changed a lot since its war with the United States, thanks largely to territorial claims by China in disputed and potentially oil-rich waters off Vietnam’s coast. The claims and China’s sometimes provocative acts in support of them have pushed Vietnam to open a slightly closer defense relationship with the United States, placing the Southeast Asian nation at the center of a brewing struggle between two global powers.

The Center for Naval Analysis takes a look at the much talked about threats to U.S. electrical grids in a new report. “National Security and Assured U.S. Electrical Power” concludes that the threats to the U.S. grid have “increased dramatically” but that future technologies hold the promise of more secure, reliable and effective transmission of electricity to American consumers.