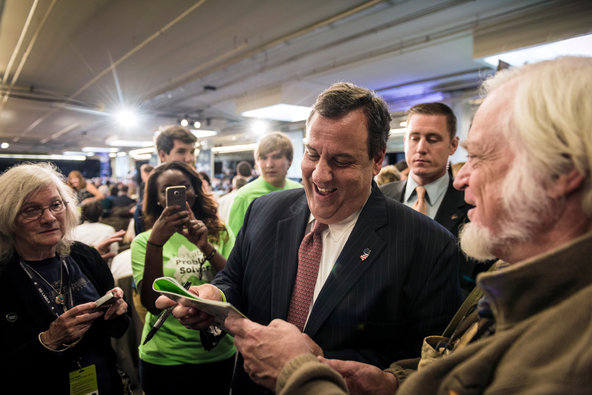 Could Gov. Chris Christie of New Jersey get disqualified from the main stage at the next Republican presidential debate, and be relegated to the undercard?

An analysis of recent polling suggests that he may not make the cut for the fourth Republican debate, Nov. 10 in Milwaukee. Monmouth University’s polling unit compiled the most recent polls that the debate’s sponsors, Fox Business Network and The Wall Street Journal, could use to determine eligibility, and found Mr. Christie getting between 1 percent and 3 percent support. But candidates must hit a threshold of 2.5 percent in the average of the last four national polls to make it on the main stage.

Mr. Christie has joined the top-tier candidates at the first three Republican debates, but recently his polling has been relatively anemic. Of the four recent polls Monmouth cited, he scored 1 percent in a mid-October NBC/Wall Street Journal poll, 3 percent with Monmouth’s own poll, 3 percent in an  ABC/Washington Post poll, and 1 percent in this week’s New York Times/CBS News poll.

More polls are likely to come out before the Nov. 4 cutoff set by the debate’s sponsors, but time is running out.

“If only one more poll comes out and has him at 3 percent and NBC gets thrown out, he makes the 2.5 percent cut,” said Patrick Murray, the director of Monmouth University’s Polling Institute. “But if Monmouth or ABC gets tossed, he falls below.”

Banishment to the undercard could deal a serious blow to the Christie campaign. The lower-tier debate draws far fewer viewers, is not in prime time, and attracts much less media attention. Still, the Christie camp was holding out hope the governor would be on the main stage.

“We are confident Governor Christie will be in the debate,” said Samantha Smith, a spokeswoman for Mr. Christie.