A HUGE security operation has been mounted around the Eurotunnel site in Calais to protect half-term holidaymakers from groups migrants. 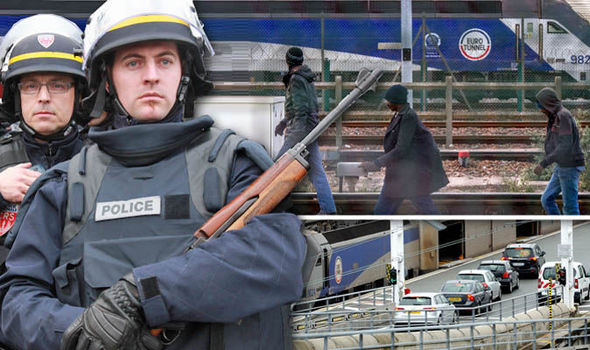 Heavily armed police are guarding the railway around the clock to prevent a repeat of the chaos that brought services to a standstill over the summer.

Their deployment this week signals the start of the biggest security operation in the Chunnel’s 21-year history and comes after thousands of refugees tried to storm high-speed trains bound for Britain.

A squad of 500 policemen has been sent to the area to patrol the perimeter fence around the clock.

Yesterday their presence was immediately felt as a group of migrants was dragged from the railway line near the tunnel entrance and held. 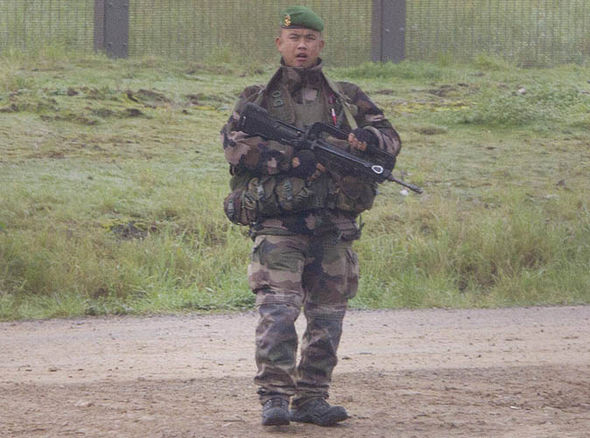 The multi-million pound security operation is the latest show of strength towards 7,000 refugees who have congregated in Calais.

Nearly all want to reach the UK to plunder jobs, housing, healthcare and benefits and are prepared to risk their lives to make it.

Eurotunnel spokesman John Keefe said: “There is now a dedicated force policing the site 24-hours-a-day, seven-days-a-week. So far, this appears to be having a strong impact in deterring migrant intrusion.”

A summer of violent disorder saw gangs evade security and access the site in Coquelles, near Calais, bringing services to a standstill.

Alarming security breaches have seen them cling to TGV trains or even attempt to walk the 30-mile stretch of underwater tunnel. 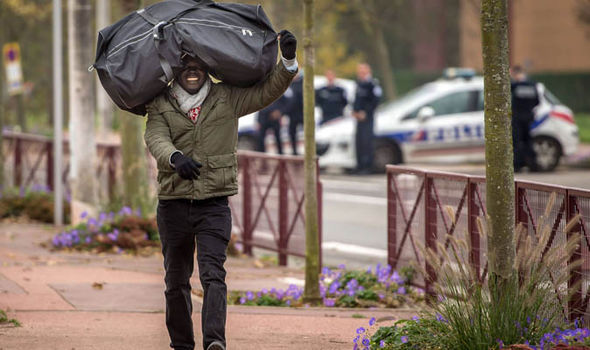 The decision to step up security comes as thousands of British families use Eurotunnel services to travel to and from the continent during half-term.

It also the busiest time of year for freight traffic with vital food and retail supplies ferried to the UK in time for Christmas.

A security source said deploying the “fearsome” Gendarmerie Mobile and Garde Republicaine would plug previously “leaky” parts of the Eurotunnel site and make it practically impenetrable.

Migrants, who have spent months clambering over fences to reach the railway tracks, were described as “mobile, aware and tactically savvy”.

He said: “They have become more determined and more aggressive and in the early part of October we saw the level of desperation mounting.

“The French authorities have taken radical action to put in place the security necessary to bring intrusions down. If the current level of policing is maintained the Eurotunnel site will be as well protected as is possible.”

Britain has pledged £7m to bolster security at the tunnel terminal, including the installation of four-metre high reinforced steel fencing to incarcerate the site.

The measures now make it one of the most heavily guarded transport networks in the world.

The “Jungle” migrant camp in Calais is home to scores of injured men who bear the scars of failed attempts to reach the UK. At least 16 have died in or near the tunnel since the crisis started in the summer.

Official figures show more than 150 illegal immigrants are caught trying to make it into Britain every day.

Stowaways were stopped at a rate of 153 a day in the first six months of the year.

The Home Office said: “The British Government has been working closely with the French authorities for many months to respond to the threat of illegal immigration in northern France. We continue to monitor developments closely to assess what more we can do to help tackle the situation on the ground.”

Ukip MEP Mike Hookem said: “I am pleased they are taking more decisive action to protect passengers and hauliers but we could have done with this a long time ago. It also needs to stay until the problem is solved, but I doubt it will.