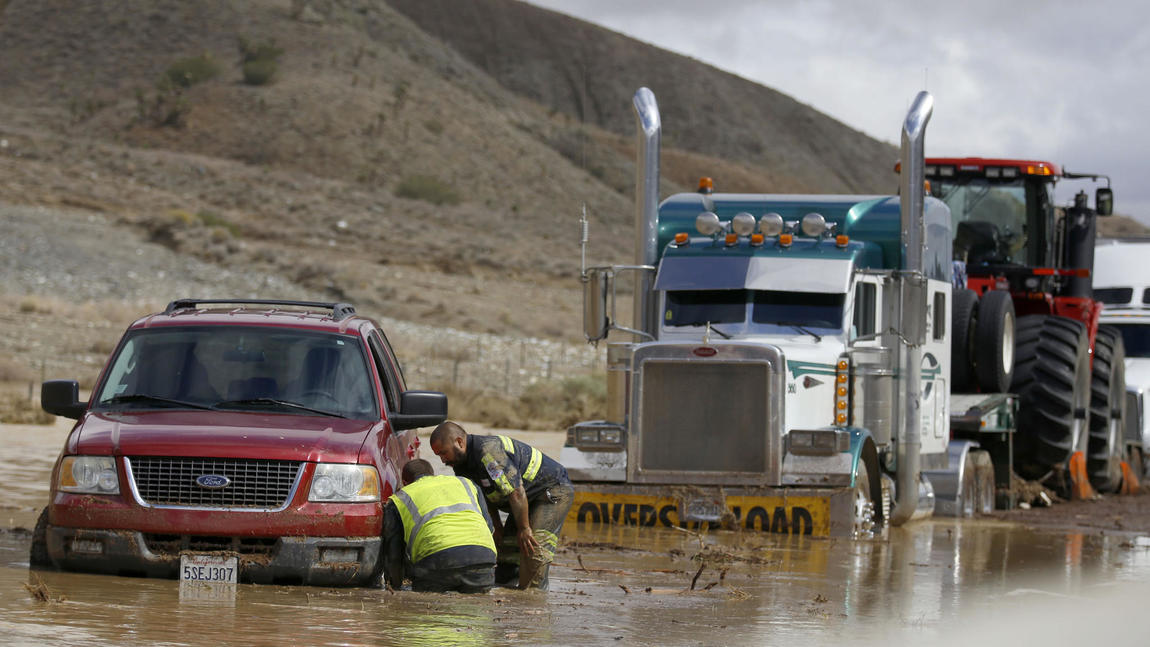 early 200 vehicles, including 75 tractor-trailers, are trapped on California 58 east of Tehachapi in up to 20 feet of mud and debris after torrential rains pummeled the area and forced drivers to flee.

Interstate 5 through the Grapevine also remained closed due to mudslides.

Multiple mudslides hammered the highway just east of Sand Canyon between 4 p.m. and 5 p.m. as commuters traveled on Tehachapi Pass, a crossing in the Tehachapi Mountains in Kern County, said Ray Pruitt, spokesman of the Kern County Sheriff’s Department. Authorities said 115 vehicles and 75 tractors-trailers were swallowed by several feet of mud.

“I have never seen slides like this,” Pruitt said.

Trapped in the mud as high as 20 feet, drivers were forced to abandon their vehicles or had to be rescued as mud swept over the highway. The drivers were moved to three shelters in Mojave and Tehachapi.

But a handful of drivers opted to stay with their vehicles overnight, he said.
Rescue crews have pulled most drivers from their vehicles, but were still working Friday morning to dig through the mud, Pruitt said. No injuries were reported.

The cleanup could take several days.

“That’s going to be a long process,” he said. Pruitt had one piece of advice for drivers: “Avoid the area.”

Trucker Shannon Doyle was driving east on the 58 when rain and hail poured down. As traffic ground to a crawl, truckers began communicating on their radios. 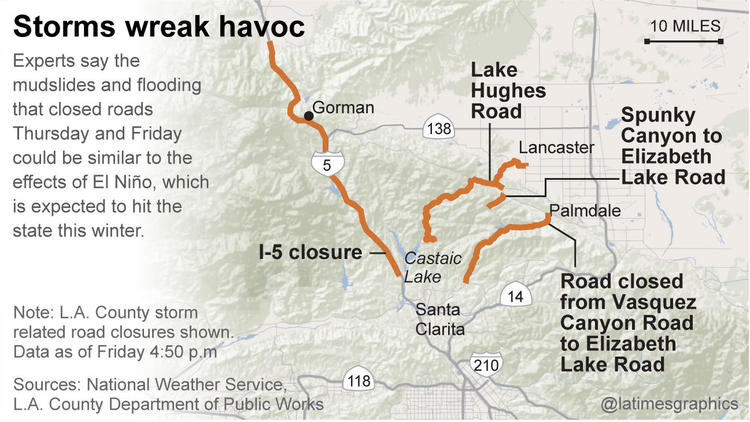 The Fresno resident looked to his left and saw what looked like a large waterfall pouring from a canyon. Then in an instant, the flowing water and mud from the canyon came down and swooped over the vehicles stalled in the traffic jam, he said.

Doyle remained in his truck until 9 p.m. Thursday, when he finally mustered the courage to venture outside of his cab. As he and other truckers scanned the sea of mud and cars, Doyle saw four women, covered in mud from head to toe, gripping their purses and blankets, their feet sloshing on the highway.

Search and rescue crews appeared around midnight, followed by heavy equipment that began excavating the mud. At about 2 a.m., a helicopter flew over the highway and shined a spotlight over the mountain.

By morning, crews had dug away enough mud to allow tractor-trailers carrying horses and cattle to drive away.

At 9 a.m. Friday, Doyle finally began moving and was able to turn his truck around to head back to Fresno.

In Northern Los Angeles County, Interstate 5 through the Grapevine, a major north-south artery for commuters and truckers in California, also remained closed Friday after dozens of vehicles were engulfed in several feet of mud and debris.

All north and southbound freeway lanes will be closed between Parker and Grapevine roads for several more hours, according to the California Department of Transportation. Early estimates are that the freeway could reopen by the afternoon.

As crews work to scoop and haul mounds of mud and debris from the roadway from Thursday’s flash flood, forecasters say another round of thunderstorms are possible Friday afternoon.

A flash flood watch remains in effect until late Friday.

Firefighters used an aerial ladder to rescue six people and their dogs stranded on the roofs of two homes.

In the Elizabeth Lake area, mud surrounded homes. A helicopter was used to rescue two other people trapped in an SUV partially submerged in rushing water. Two horses trapped in a mud flow were also pulled to safety. No injuries were reported, according to the Los Angeles County Fire Department.

The Leona Valley, just west of Palmdale, was the hardest hit, with rain falling six inches an hour and winds gusting to 60 mph at 4:20 p.m., according to the weather service. The storm eventually diminished, but as it moved eastward, it brought record daily rainfall to Palmdale.

John Dumas, a meteorologist with the National Weather Service, said Thursday’s storm was part of the same system that hit Southern California more than a week ago.

The storm, which was lingering off Baja California, had been circling over Southern California for days and finally settled over mountains and deserts of northern Los Angeles County and eastern Kern County, Dumas said.  Once it hung over the area, the slow-moving storm dumped a large amounts of rain and formed new storm systems.

The thunderstorms are not El Niño-related, even though they look a lot like they are, he said. These storms are typical for October, he said.

“The effects of those storms could be similar to this one,” he said.

A low-pressure system spinning over Point Conception off the Santa Barbara County coast will allow an unstable and moist air mass to linger over the deserts and mountains Friday. Thunderstorms could produce hail and erratic wind gusts.

The chance of mountain and desert thunderstorms will diminish on Saturday and Sunday, the weather service said.

By Tuesday and Wednesday, temperatures are expected to heat up and Santa Ana winds could develop, making for dangerous fire conditions, forecasters said.