The Australian government has released pictures showing the riot at Christmas Island migrant detention centre earlier this week and its aftermath. 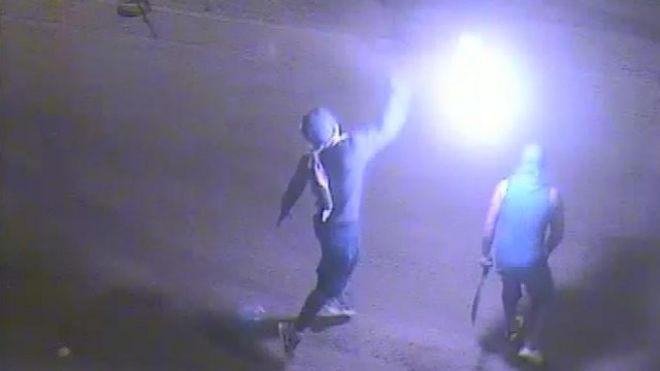 Police used tear gas on Tuesday to end three days of unrest sparked by the death of an Iranian asylum seeker.

CCTV images appear to show two detainees, one armed with a machete, lighting and throwing a petrol bomb.

The unrest began on Sunday after an escaped detainee was found dead. Inmates started fires and barricaded themselves inside a compound with weapons.

Meanwhile, a Border Force spokesperson confirmed that seven detainees who allegedly participated in the unrest were being transferred from Christmas Island to Australia’s mainland.

“The detainees are travelling on a charter flight accompanied by security officers. Restraints are used where appropriate for the safety and security of detainees, staff and the aircraft,” a statement provided to the BBC said.

Christmas Island is a remote Australian territory in the Indian Ocean, 2,650km (1,650 miles) north-west of Perth.

The facility houses asylum seekers alongside people, including New Zealand citizens, whose Australian visas have been cancelled after they committed crimes.

Mr Dutton told the ABC that the asylum seekers held at the compound with the convicted criminals – including the New Zealand nationals – were only sent there after risk assessments.

“Some [asylum seekers] have had an extreme threat assessment worked up and that’s as a result of their own behaviour,” he said during a radio interview.

“That is the basis on which the [Australian] Border Force officers make a decision about whether somebody is at a high security facility or whether they are at a low-security arrangement.”

He blamed the unrest on “a hardened criminal population that occupies the immigration detention centre”.

He also rejected suggestions that some of the New Zealanders held at the camp had only been convicted of minor crimes such as shoplifting and traffic offences.

Under controversial policies, Australia sends all intercepted asylum seekers to Christmas Island as well as Manus Island in Papua New Guinea and Nauru in the South Pacific.