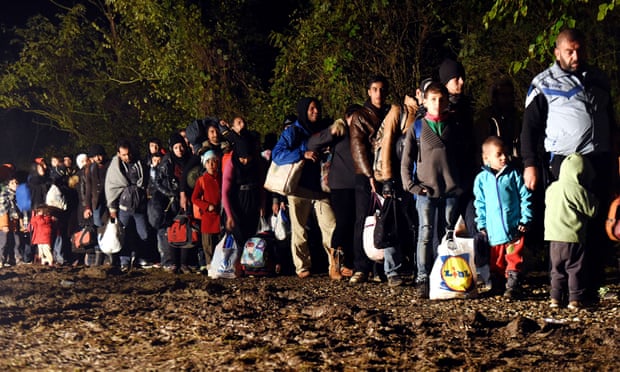 An extraordinary row between the Church of England and the prime minister has burst into the open as 84 bishops accuse David Cameron of ignoring their offers to help to provide housing, foster care and other support for up to 50,000 refugees.

In a remarkable move that shows their frustration at Downing Street’s foot-dragging, the bishops have released to the Observer a private letter they sent to the prime minister in early September. In it they called on him to increase the number of refugees that the UK is prepared to take over the next five years from 20,000 to 50,000, and to consider involving the church in a national effort to “mobilise the nation as in times past”.

Describing the mass movement of refugees as a “moral crisis”, the bishops offered to rally “churches, congregations and individuals” across the country behind efforts to make rental properties and spare housing available to those who had fled their homelands.

They also told Cameron they would “promote and support foster caring” across the C of E and wider community, so that thousands of unaccompanied children who had become homeless could find places to live and appropriate care.

But today, to accompany the release of their letter, Paul Butler, the bishop of Durham, issues a statement making clear their patience is exhausted.

He describes the government’s policy response as “increasingly inadequate” and complains that the prime minister has failed, over more than five weeks, to respond to their suggestions with more than a cursory acknowledgment.

“It is disheartening that we have not received any substantive reply despite an assurance from the prime minister that one would be received,” Butler says. “There is an urgent and compelling moral duty to act, which we as bishops are offering to facilitate alongside others from across civil society.”

He adds: “There is a real urgency to this issue with those increasingly being forced from their land as their homes are literally bombed into the ground. As the fighting intensifies, as the sheer scale of human misery becomes greater, the government’s response seems increasingly inadequate to meet the scale and severity of the problem.”

The row exploded as the refugee crisis continued to escalate. On Saturday Hungary said it would temporarily reinstate border controls on its frontier with Slovenia, having already sealed off its border with Croatia to stem the flow of migrants. Its foreign minister, Péter Szijjártó, told the national news agency MTI that the government had information that migrants had started to be shipped to Slovenia’s border with Hungary.

In a further attempt to stem the flow of refugees into the EU, Angela Merkel, who is coming under fire at home over her willingness to open Germany’s doors to so many refugees, will hold talks in Ankara. The German chancellor and Turkish leaders will discuss how to secure the porous border between Greece and Turkey.

The intervention by the bishops – the latest sign of discontent among church leaders with the government – will be embarrassing to Cameron, who has always claimed to support community, or “big society”, solutions to problems through collective action at local level.

Last month Cameron announced that the UK would admit 20,000 refugees, but this announcement came only after images of the body of a three-year-old Syrian boy, Alan Kurdi, washed up on a Turkish beach, had galvanised public opinion in support of providing sanctuary for those fleeing the crisis in the Middle East.

According to church sources, the bishops’ letter was written in September with regret rather than in anger. But in the past few weeks frustration has grown at the slow pace of the government’s resettlement programme. Last week Richard Harrington, the minister with responsibility for refugees, declined to say how many had been brought to the UK, telling MPs: “I don’t think anything will be helped by my giving a running commentary on numbers.”

The bishops were also dismayed by the belligerent tone of Theresa May’s speech to the Conservative party conference this month.

In their letter the bishops spoke of “one of the largest refugee crises ever recorded”, saying that “a moral crisis of this magnitude calls each and all of us to play our parts”. They said they believed the country would be willing to back a concerted, national effort and a more ambitious response from government.

“We believe that such is this country’s great tradition of sanctuary and generosity of spirit that we could feasibly resettle at least 10,000 people a year for the next two years, rising to a minimum of 50,000 in total over the five-year period you [Cameron] foresaw in your announcement.” The letter was signed by 84 CoE bishops.

A Downing Street spokesman declined to answer why the bishops had not received a full response from the prime minister.

The spokesman said: “It is absolutely right that Britain should fulfil its moral responsibility to help the refugees.

“But in doing so, we must use our head and our heart by pursuing a comprehensive approach that tackles the causes of the problem as well as the consequences.”