EU leaders are expected to offer countries in Africa billions of euros in exchange for help with the migrant crisis at a summit in Malta.

The European Commission is setting up a €1.8bn “trust fund” for Africa and has urged member states to match that sum. However, there are doubts about whether they will do so. 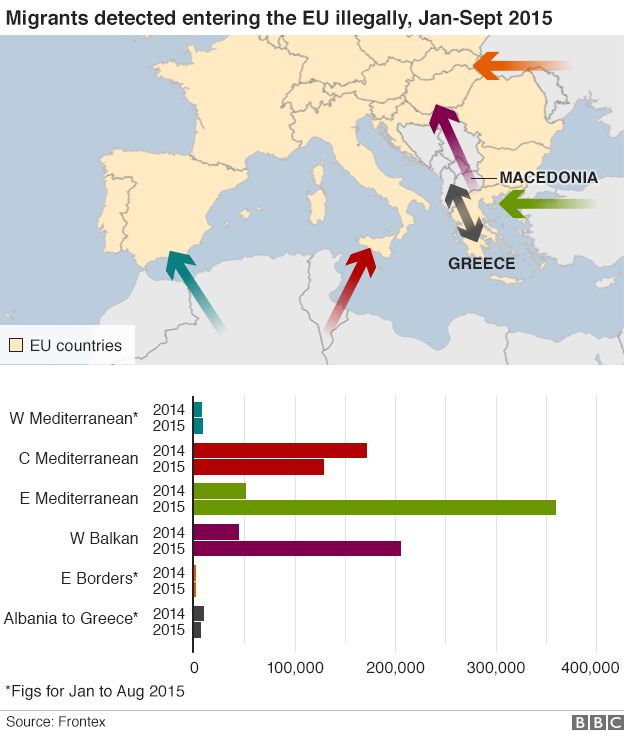 The European Commission says it will give €1.8bn (£1.3bn) and it expects EU countries to pledge more.

The aim is to tackle the economic and security problems that cause people to flee, and persuade African countries to take back more failed asylum seekers.

The meeting was planned after a sinking off Libya in April. About 800 died.

Some 150,000 people have made the dangerous journey across the Mediterranean from Africa so far this year, arriving mainly in Italy and Malta.

However, the EU’s focus has moved east since April, with large numbers of refugees – mostly Syrians – arriving via Turkey and Greece and then travelling north through the Balkans.

In other developments on Wednesday:

More than 60 leaders from Africa and Europe, including UK Prime Minister David Cameron, are meeting in Valletta in Malta for the two-day summit starting to discuss the mass movement of people.

The European Commission is setting up a €1.8bn “trust fund” for Africa and has urged member states to match that sum. However, there are doubts about whether they will do so.

Speaking in the Maltese parliament on the eve of the summit, the President of the European Council Donald Tusk said the plan was to make “much more progress on poverty reduction and conflict prevention”.

He added that Africa’s population was expected to double by 2050 and that action was essential, particularly due to the strain placed on EU solidarity by refugees arriving from conflicts in the Middle East.

The BBC’s Chris Morris in Malta says African leaders are likely insist on a much clearer path for smaller numbers of their citizens to migrate officially to Europe, in exchange for help on the crisis.

The latest deaths came when 14 people drowned after another boat sank between Turkey and the Greek island of Lesbos, early on Wednesday.

Seven children were among the dead. The coast guard was able to rescue 27 people.

Tensions in the EU have been rising because of the disproportionate burden faced by some countries, particularly Greece, Italy and Hungary. Most migrants then head to Germany or Sweden to claim asylum.

EU leaders have agreed a controversial programme to relocate thousands of migrants – but so far only around 130 have been successfully moved from Greece and Italy.

Another source of embarrassment for the EU is a failure of member states to follow through on pledges made on their behalf by the bloc’s executive Commission.

A note on terminology: The BBC uses the term migrant to refer to all people on the move who have yet to complete the legal process of claiming asylum. This group includes people fleeing war-torn countries such as Syria, who are likely to be granted refugee status, as well as people who are seeking jobs and better lives, who governments are likely to rule are economic migrants.